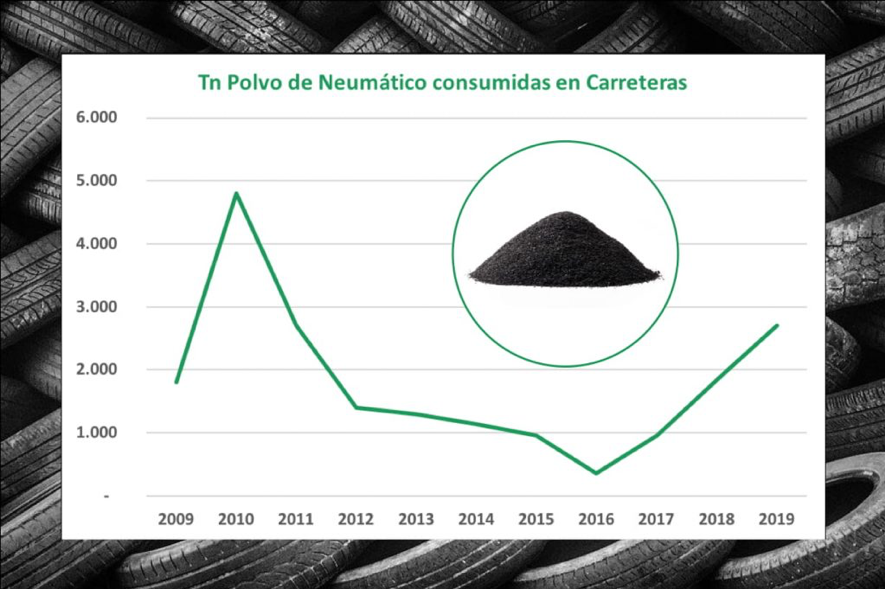 Since the beginning of the century, Spain begins to make its first roads with tire dust. 20 years have passed, a period of maturation of the technique sufficient for the asphalts with tire dust to be commonly used. But the reality during these years has shown that it has not been a simple path.

In 2007 the Ministry of Development, after Spain had already carried out important works, published OC 21/2007, which opens the door for use in the works of the Ministry of bitumen and asphalt with tire dust. This order generates a first explosion and causes that in 2010 4,800 tons of tire dust were consumed in Spain, according to reports from the Comprehensive Management Systems.

This figure, still far from the objectives set out in the «Integrated National Waste Plan for the period 2008-2015», PNIR, (close to 20,000 tons of tire dust on the roads), marked a path that was being traveled.

But from there the technique begins a free fall, due to factors such as the economic crisis, but mainly because the industrial sector did not know how to respond to the challenges and problems posed by existing technologies to date.

This decline leads to that, in 2016, the 350 tons of total tire dust consumption on the road are barely exceeded in Spain. Which showed that technology was at risk of disappearing. This was a serious problem, since the disappearance of the technique put the fabric of future tire recycling at risk in Spain, since the road is one of the niches where the use of tire dust makes more sense.

In the technical aspect, the regulations and the systems of use, were not able to value the tire dust on the road, as they did in others in countries such as the United States, where consumption has been massive for more than 50 years.

But in 2017 CIRTEC was born and with the company a new consumer technology such as the “RARx” PREDIGERATED ADDITIVE. This additive breaks with the barriers of consumption, and from its beginning it is very well accepted by the final consumers, asphalt plants, due to its quality, and especially to its simplicity and economy.

The official consumption figures for the year 2019, provided both by SIGNUS (main integrated management system), and by ASEFMA (Spanish Association of Asphalt Mix Manufacturers), have demonstrated not only the success of CIRTEC and the RARx technique, but that Such figures have also shown, in just a year and a half, that the technique has been able to respond to the will of the Ministry to continue betting on tire dust on its roads.

The year 2019, according to data from different sector sources, has yielded a total consumption figure of 1,467 tons across the entire sector, which although it is very far from the consumption recorded in the year 2010, represents an increase of 400% of the figure of 2016. A success that allows us to think that the path is the right one.

As for the RARX technology, in terms of its use in Spain, it has managed to be the second technology in terms of consumption, only behind the IN SITU wet road, exceeding in consumption the sum of the rest of the manufacturers sector of bitumen with rubber in Factory.

On the other hand, SIGNUS has reported that the total consumption of tire dust in Spain (counting on the tons consumed by CIRTEC for the export of RARX), has been 2,750 tons, a new milestone.

The figure is notorious if we consider that CIRTEC has consumed 2,100 TN, overall, that is to say 78%. With a dust consumption for RARx manufacturing of 1,600 TN, that is 2.5 times the total consumption of the rest of the sector.

Finally, we must thank the asphalt sector for its effort to increase consumption, since the Circular Economy is not only not a moral obligation, but a mandatory requirement if Spain, and other countries, want to meet their ecological commitments